Training lessons from a dog 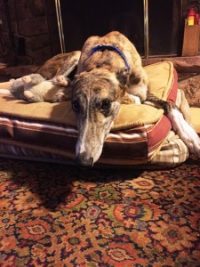 The other day I watched my foster greyhound teach himself how to use the stairs. Monkey is our first foster dog and while he’s 20 months old, he doesn’t know stairs, glass doors, dog beds and the creature comforts of a home. Racing greyhounds are raised at the kennels and race tracks so when they retire and go to their adoptive or foster homes, even a 5-year-old dog is suddenly like a small puppy who has to discover everything in life.

I watched the wheels spinning in Monkey’s brain about how on earth to get down these weird things we call stairs. It suddenly occurred to me that animals don’t have an “I can’t.” Monkey didn’t look down the steps and think, “I can’t do it.” No, he saw a room where he hadn’t yet been, saw his person sitting there calling him and by golly he wanted to get to this room!

Sure, it took him a few tries with this little dance of his front paws down a step and back up a step, then he stepped his front paws down most of the steps and finally his back paws followed. But in the end, Monkey faced his fear of the steps because what he wanted was more important than what he was afraid of.  I could literally see the determination on his face to get himself down the stairs and into this room with me. He was laser-focused on getting what he wanted and just found a way to figure it out.

I wish I had thought to catch it on video because it was the funniest, most awkward way to get down a short flight of steps, but he attacked it one step at a time to get what he wanted. Every time Monkey practices the steps, he gets just a little bit better. He’s much less awkward now, yet each time he’s still careful and thoughtful in his approach and he doesn’t rush the process.

Do you hear the underlying message of this story? How all of this is what I teach about our kettlebell practice? Approach our kettlebell or fitness training without “I can’t.” Practice our kettlebell training with a careful and thoughtful approach because rushing the process might hinder our progress. Know what we want and focus only on how to get to our end goal, step by step. Don’t let fear stand in our way of what we want.

I don’t have a video of Monkey going down the steps but do I have this one of him discovering the surround sound for the first time:

Get in the best shape of your life and feel better than ever at Iron Clad Fitness. We’ll meet for a free consultation to discuss your goals and needs and how we can help transform your body and your life!

Get in the best shape of your life and feel better than ever at Iron Clad Fitness. We’ll meet for a free consultation to discuss your goals and unique needs and how we can help transform your body and your life!

Get in the best shape of your life and feel better than ever at Iron Clad Fitness. We’ll schedule a phone or Skype consultation to talk about your goals and your fitness experience, and you’ll see how we can transform your body and your life!

Get in the best shape of your life and feel better than ever at Iron Clad Fitness. Sign up for a free consultation now to see how we can transform your body and your life!